We use cookies to give you the best experience possible. By continuing we'll assume you board with our cookie policy...
It's OK
Login Live Chat
x
Back to main Essays page
Descriptive Free Essays

The Beer Game is a simulation software game that allows participants change roles according to their skills and capabilities for training. This game helps to explicitly show practical implementation of results of training distributed between participants. The game allows participating in different roles that modulate relations between different parts in a supply chain. For instance, sometimes, the interchangeability of roles has the positive effect on training. According to the rules of the game, the roles are to be distributed in the following manner: retailer, wholesaler, distributor and producer. The game suggests acting differently according to the set situation.


Generally, the aim of the game is simple – to reduce costs for all participants in a supply chain. It allows manipulating with available resources to reach the final aim of the game that is in reducing costs. Suppliers provide distributors with products or services that later will be set according to the requirements of the end-user (customer).

I have played the Beer Game 4 times per each role; however, it was required to try playing in at least 2 roles to be played twice each. In the following analysis, the more effectively played roles were selected for the close comparison. They are The Retailer and The Wholesaler.

What are the most interesting issues you observed during the simulation game?

It was interesting to play the Beer Game in all four roles. However, the roles of Retailer and Wholesaler were played the most productively by me. Figure 1 shows results between 4 players in 4 roles. It can be observed from the graph that the Retailer has won the game. However, it was the overall lost for the supply chain in several thousands of dollars. In any case, other participants (Distributor, Producer and Wholesaler) caused more loss than the Retailer. In this relation, the game is an effective training of the team work that is represented by 4 roles for playing. 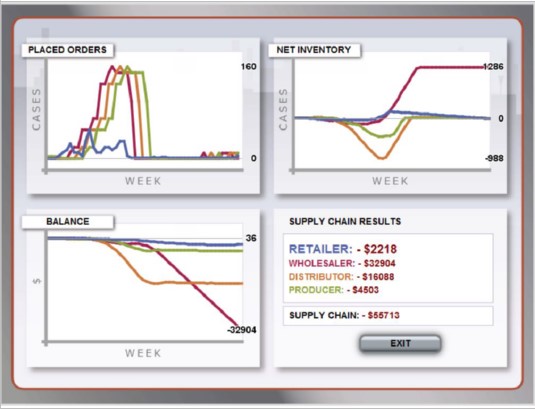 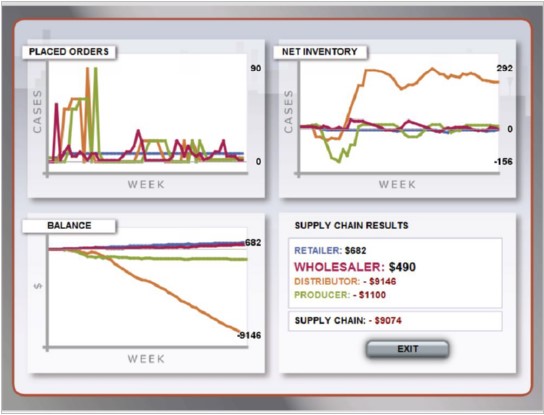 Figure 2 shows my playing acting in the Wholesaler role. In this case, it can be observed clearly that the Retailer has won when he earned over 600 dollars. At the same time, the Wholesaler has won over 400 dollars, Distributor and Producer caused financial loss for the supply chain, which resulted in the negative value according to the selected data for this assignment. In any case, this experience was valuable for all the 4 roles as it kept us training on building an effective relationship within the supply chain.

Man, this thing is getting better and better as I learn more about it. 123helpme did exactly what you said it does.

Working with you was one of the best experiences I have had in my college years. It was so cool to receive such a high mark on my essay. I will always be grateful to you for the help you gave me. I honestly don't think I could have made it without your help.

Great, Quick, Neat, and on time

As a working student, I don't have enough time for doing all my difficult assignments. Luckily professionals at 123helpme.org can do it for me as soon as I need. Thank you!

What will I (my team) do the same or differently next time?

The Beer Game suggests training on reducing costs within the supply chain. However, this simulation software accessible on web represents an innovative approach towards problem solving technologies that are available in free access. For instance, when there is a need in human players for Beer Game, they can be substituted by the “ghost” players that are generated by the computer software. However, it is not advisable by game developers for they are interested in improving the skills of dealing with people, as well as working within an organized team. I this relation, “ghost” players within the Beer Game are not advisable to be present within the playing process.

As for me, I have played almost every time with human players, which allowed me getting familiar with the human way of business thinking, not just as the one of being generated with the computer simulation software. However, for the future, we need to change tactics according to the set strategy of our company. For instance, I have noticed that when we played the Beer Game, there was a significant lack of coordination in actions between players, so some of them were not deeply involved or even interested in the results. It is important to have faith when building our goals, so the next time we play, we will build the appropriate strategy of playing by observing rules and risks of loss.

Personally, I think that if we had more time for playing, we could manage to solve coordination activities problem and improve business thinking and analytical approach to building supply chain effectively.

What have I learned from this simulation game?

It is highly advisable not to play with the “ghost” players but select trusted human players instead of those generated by the computer software. When playing with my friends, I did not use controversial approaches. Instead, I have been trying to reduce the spirit of competitiveness within our supply chain, so that we do nott have any lost since the game is over.

The Beer simulation game is an effective instrument for improving performance within the organization. The game allows getting familiar with different management styles, the most appropriate of which are effectively structured according to the Deming Cycle, such as the following: “Plan-Do-Check-Act”. In this relation, all supply chain members should work on strategic goals implementation rather than of taking care about their personal interests.

This reflective report is about Beer Game that is located on web. Though this game’s result analyses (1) bullwhip effect; (2) supply chain management; (3) information flow management; (4) inventory management (stock control), all these options are highly advisable to be highlighted, with inventory implementation as the highest priority in the supply chain.

It was found out that supply chain management is the set of actions that should be regarded in a close context and correlation with the Deming Cycle of “Plan-Do-Check-Act”. This four-fold principle allows all participants working out the overall strategy of the company aimed on the organizational performance improvement.

In my opinion, the roles in this game should be distributed even more effectively according to the user interests. However, each team member should try to complete tasks according to all roles of Beer Game. The simulation of reality in this game allows users getting familiar with all available types of leadership style.

You can ask us “write my descriptive essay” on this or any other topic at 123HelpMe.org. Don’t waste your time, order now!

Order Essay with this Title

On the other hnd, in my personal experience, it was a bit difficult to clarify leader responsibilities, and even more than that, it was hard to appoint the role of the leader in this game. The management of the game is simple; however, I believe that results of this game obtained by us can be improved in the future perspective. For instance, roles can be stratified according to the type of features of character, and at least 2 roles can be played by every participant trying even more times until the result is accomplished in this game.


In any case, our experience in all roles is a good evidence of our desire to get trained and our ability to solve difficulties while playing. Since every role is specific, it is required to get familiar with functionality of the game rather than taking care about results viewing them as the major competitive category. It should be considered that all participants are equally stacked to the common set of goals.