We use cookies to give you the best experience possible. By continuing we'll assume you board with our cookie policy...
It's OK
Login Live Chat
x
Back to main Essays page
Nursing Free Essays

Alzheimer’s disease, which is commonly referred to as the AD, is a very dangerous progressive neurological disease characterized by such early symptoms as short-term loss of memory, disorientation, significant problems with language, confusion with time as well as place, withdrawal from work and various social activities, emotional apathy, and many others. Despite the fact that Alzheimer’s disease affects neurological system, as it is a chronic neurodegenerative disease, it always has devastating impacts on the entire body. The given paper aims to identify and evaluate the effect of Alzheimer’s disease on other bodily functions. In other words, the research paper will review how Alzheimer’s disease results in pathophysiological changes in at least two systems of a human body. Moreover, much attention will be paid to the influence of genetics, age, gender, ethnicity, and behavior on Alzheimer’s disease as well as diagnosis and treatment of the AD.

It is rather important to emphasize the fact that Alzheimer’s disease is poorly understood even in the 21st century, because the opinions of the researchers concerning the main causes of the disease vary drastically (Morrison & Lyketsos, 2005). For instance, the majority of the researchers in the sphere of healthcare assure that genetics and genes are the major risk factors that stimulate the development and progression of Alzheimer’s disease. According to the statistics provided in numerous research studies, the genetic heritability of the disease is very high as it ranges from 50% to almost 80% (Foster, 2004). On the contrary, the critics of this idea assure that head injuries, hypertension as well as obesity and depression are the main causes of Alzheimer’s disease (Foster, 2004).

According to the statistics provided in medical research studies, Alzheimer’s disease has potentially devastating effect on respiratory system of a patient. Shallow breathing, decreased intake of oxygen, and, finally, apnea and aspiration are typical for people suffering from the Alzheimer’s disease (Engelhardt & Laks, 2008). For instance, apnea or, in other words, intermittent pauses from breathing during sleep, results in the decreased amounts of oxygen reaching the blood inside a human body. As a result, because of significant decreases in oxygen intake, human brain and many other vital organs fail to function appropriately (Engelhardt & Laks, 2008).

THANK YOU!!! I got an A+ on my essay and will be promoted to the next level. I am so appreciative of what you did for me.

Thank you 123HelpMe.org. You fully met my expectations and instructions. The guys from your support service were very helpful. In a word, I'm more than satisfied with such top results.

I ordered an essay from your service yesterday. And I want to admit the high quality and prompt delivery. You are cool guys! I am pleased with everything!

One of the best writers I've seen, moreover 123helpme.org is the best online writing service on the internet. Highly recommended.

Impact of Genetics, Gender, Age, Ethnicity, and Behavior on Pathophysiology of Alzheimer’s Disease

Diagnosis and Treatment of Alzheimer’s Disease

An abundant experience of the researchers engaged in the sphere of medicine proves that Alzheimer’s disease may be diagnosed with the help of complete and thorough medical assessment (Morrison & Lyketsos, 2005). It is important to note that there is no single test or experiment, showing whether an individual has this disease. In general, diagnosing the AD foresees detailed medical evaluation, especially examination of medical history, testing of mental status, accurate physical, and neurological examinations. Moreover, there are other additional medical tests ruling out the most common symptoms of Alzheimer’s disease (Morrison & Lyketsos, 2005). 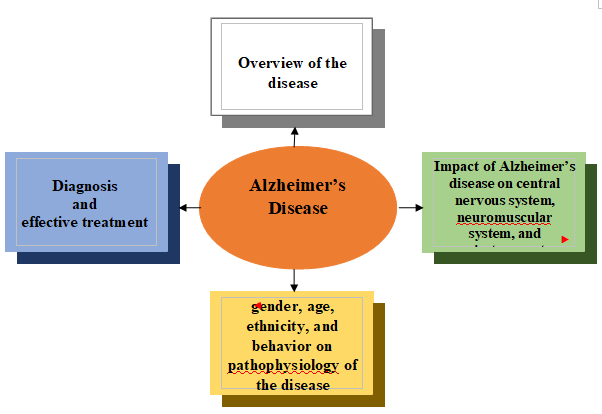 As a result, having evaluated the effect of Alzheimer’s disease on several body systems, analyzed the impacts of genetics, gender, ethnicity, age, and behavior on pathophysiology of the disease, and identified effective methods of treatment of Alzheimer’s disease, it is possible to infer that this progressive neurodegenerative illness negatively impacts central nervous system as well as neuromuscular and respiratory functions of a human body. The most common symptoms of Alzheimer’s disease are increased confusion, disorientation, mood swings, problems with reading, talking, and writing, significant difficulties while performing spatial tasks, and serious problems with short-term as well as long-term memory. Genetics, gender, ethnicity, lifestyle, age, and behavior influence the development and progression of the disease. Despite the fact that there is no effective cure for Alzheimer’s disease, healthy lifestyle, physical exercising, balanced diet, caregiving, numerous psychological interventions, and traditional medications may increase the quality of life of patients with Alzheimer’s disease and their longevity.

Check our nursing paper writing service, you can buy essay on this or any other topic at 123HelpMe.org. Don’t waste your time, order now!