We use cookies to give you the best experience possible. By continuing we'll assume you board with our cookie policy...
It's OK
Login Live Chat
x
Back to main Essays page
Descriptive Free Essays

Hampton Court is one of the most prominent and grandiose royal palaces in England. Its history as a residence, though not a royal one yet, began in 1514 when Cardinal Thomas Wolsey, advisor to King Henry VIII at the time, bought the estate. Wolsey turned the place into an extraordinarily sumptuous and pompous palace with luxurious private chambers and vast courtyards. However, the King took fancy to the place and bought it as soon as Wolsey fell into disfavor. King Henry VIII known for his inclination to pomposity and splendor made Hampton Court even more magnificent. He added more than glorious personal chambers for himself and for all his wives, a royal tennis court, and the Clock Court. When King Henry VIII died, Hampton Court was the most magnificent palace in England. It was little changed by later monarchs who used parks and courts for hunting purposes and enjoyed the glorious old-fashioned accommodations. The building of the site attracted attention of the monarchy only in 150 years after the coronation of William III and Mary II. They undertook construction and reconstruction of the palace and turned to Sir Christopher Wren, asking him to remodel the palace in the Baroque style with magnificence enough to rival or even surpass the Versailles Palace in Paris. Wren completely transformed the east and south sides of the palace and replaced Tudor turrets, chimneys, towers, and windows with elegant and beautifully adorned Baroque and Classic exteriors. Some additions were introduced to royal chambers by Sir John Vanbrugh under the reign of George I. Last rooms for all members of the royal family were built only later under George II. The building could eventually be considered as finished in 1737 when all final furnishings were done. Hampton Court occupies an area of 700 by 400 feet. Its south façade faces river Thames, the east façade faces the park, and the west one faces the entrance courtyard or the Base Court.


Despite numerous reconstructions, many parts of the older palace have been preserved until modern days as it was too costly to demolish them. Thus, Hampton Court is simultaneously a representative of several architectural styles. This paper will focus on distinctive features of different styles and variations that can be observed in three courtyards of the palace: the Base Court, the Clock Court, and the Fountain Court.

The contrast catches the eye as soon as one goes through the main entrance, which is on the west side of the palace. The entrance to the Base Court is through a gate with stone piers built by Kent around 1730, far later than the Base Court itself. The entrance is marked by sculptures of lion and unicorn and trophies of arms. It resembles the pomposity of the Baroque rather than strictness and grimness of medieval castles. The roadway runs to the main entrance, which is the gatehouse on the west side of the Base court. On the left, there is “a long line of late 17th-century brick buildings of two stories, built for stabling and offices” (Spelthorne Hundred: Hampton Court Palace, architectural description 2015). After passing decorations and adornments of the 17th century architecture, one comes to the Base Court.

I would like to express my appreciation for the amazing job you did for me. I am sure I'll get a good grade for this essay. How could it not? Thanks for your help.

I am a working student and I don't have enough time for doing boring paperwork. Besides, I want to spend time with my friends. Luckily 123helpme.org can help me. Thank you, guys!

Thanks for helping me with the last 2 papers. The writer you've assigned to me complete my paper on time and with all requirements.

I needed help with a Psychology essay, this was just what I needed. Definitely worth the money.

The Base Court was built when Wolsey was in charge of the palace, a century before the entrances were adorned. Thus, the buildings in the Court bear features of the Tudor style with little detail and “ornament confined to the pinnacles on the parapets and the chimney-stacks” (Spelthorne Hundred: Hampton Court Palace, architectural description 2015). On three sides, the courtyard is surrounded by Wolsey’s two-storey battlemented buildings. Windows are mostly with four-centered heads. The material used for buildings is red brick, usually of dark red color. In some places, black bricks are sometimes inserted to create some kind of pattern. Strict red brick walls with octagonal turrets and no decoration give medieval air to the building. Indeed, the Great Hall, overlooking the courtyard, is believed to be the last surviving medieval hall in England despite King Henry VIII’s changes (Foyles 2011). The only decorations of the courtyard are terra cotta sculptures of Roman Emperors designed for Wolsey by an Italian architect, Giovanni da Malano. The existence of these roundels confirms that Hampton Court appears to be the first Renaissance building in England (Jones 2005, p. 124). There are also panels of royal arms. The gateway of Anne Boleyn still carries the arms of King Henry VIII. The other side of the gateway, the one in the Clock Court, has preserved Wolsey’s coat of arms. The use of space follows traditions of the time. The vast cobbled courtyard is practically empty, except for the wine fountain added later by Henry VIII. The main entrance houses a clock, which gave the palace its name. 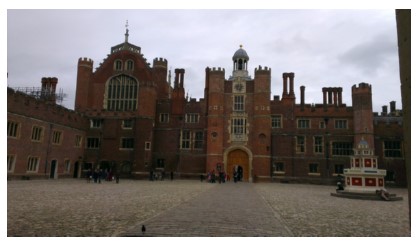 The Clock Court already dates back to the times of King Henry VIII. The King liked the lavishness of the palace and wanted to turn it into something even more splendid. Therefore, certain changes can already be observed within the Clock Court. Windows of the buildings and galleries are already different, tall and sharp, a bit pointed, designed in the Gothic style. “The cellar is lit by a series of small windows , above is an expanse of brickwork and then five four-light transomed windows with four-centred heads” (Hampton Court Palace n.d.). The same red brick walls are decorated as if by spears, put between the windows, and piercing the sky. This also gives the wall a rather Gothic look. Over The Tudor gateway known as Anne Boleyn’s Gatehouse, there is a magnificent astronomical clock designed for King Henry VIII, which gave its name to the courtyard. The Clock was built in 1540 by Nicholas Oursian and is believed to show time, phase of the moon, Zodiac sign, day of the year, high tide, and the date (Ross 2015). On the south side of the Clock Court, there is a 17th century colonnade made of Portland stone. It features a cornice and a balustrade. The east side of the Court houses an entrance feature by William Kent, which reflects early Gothic style and bears much resemblance to the Tudor style of building gateways. However, unlike Tudor archways, this one is adorned with a lancet window and quatrefoil tracery. Thus, the Clock Court is already much more decorated than the Base Court. The number of beautiful fittings, however, reaches its peak in the Fountain Court.

The south-east quarter of the palace is occupied by the Fountain Court. It was planned by Sir Christopher Wren who designed it to convey some resemblance to the grandeur of the Versailles Palace. The buildings are of late 17th century Baroque design. The Fountain Court is relatively small as compared to the previous two courtyards. The buildings here are higher than in other courts (three stories compared to two stories in the Base Court). At the ground floor, there is a Portland stone arcade and cloister walk. The piers between the gateways are made of Portland stone with drafted joints and serve as plinths for half-columns of the Corinthian order (Spelthorne Hundred: Hampton Court Palace, architectural description 2015). Windows are tall and stone-framed. There are several levels of them, the first containing segment-headed windows, followed by tall rectangular windows, then small round windows, small square attic windows, and finally a balustrade. The floor of the courtyard is covered with grass unlike paved floor of the Base and the Clock Courts. In the middle of the courtyard is a pond or a fountain, which served as the main decoration. The archways are no longer of simple Tudor style, each of them is decorated with stucco at the top. The central pediment is decorated with a ‘The Triumph of Hercules over Envy’ carving by Caius Gabriel Cibber. The east façade of the palace built by Sir Christopher Wren resembles not Chateau de itself, but Louis’s palace at Versailles with its strong horizontal lines. It was, however, an English version of the French palace due to the use of red brick. Wren built this part of the palace in his own architectural style, based on Classical precedents (Jones 2005, p. 126) as well as Baroque adornments.

In conclusion, Hampton Court is a representative of several architectural styles, which strikes one’s attention immediately when looking at the three courtyards of the palace. The Base Court was built under Cardinal Wolsey and reflects Tudor tendencies in architecture. The Clock Court built under the reign of King Henry VIII bears features of the Gothic style. The Fountain Court designed by Sir Christopher Wren is constructed to resemble Versailles and, therefore, it reveals Classical features as well as Baroque elements. However, features of different styles are not separated from each other, but interwoven in this structure due to numerous reconstructions. The architecture of the palace goes a long way from medieval and Tudor plain red brick buildings with simple turrets through sharp Gothic peaks and to Classical and Baroque walls and archways richly adorned with fittings, carvings, and stucco. Even windows have undergone noticeable changes on different sides of the palace. Thus, Hampton Court is a building of immense importance for architecture and the history of art.

You can ask us “write my descriptive essay” on this or any other topic at 123HelpMe.org. Don’t waste your time, order now!